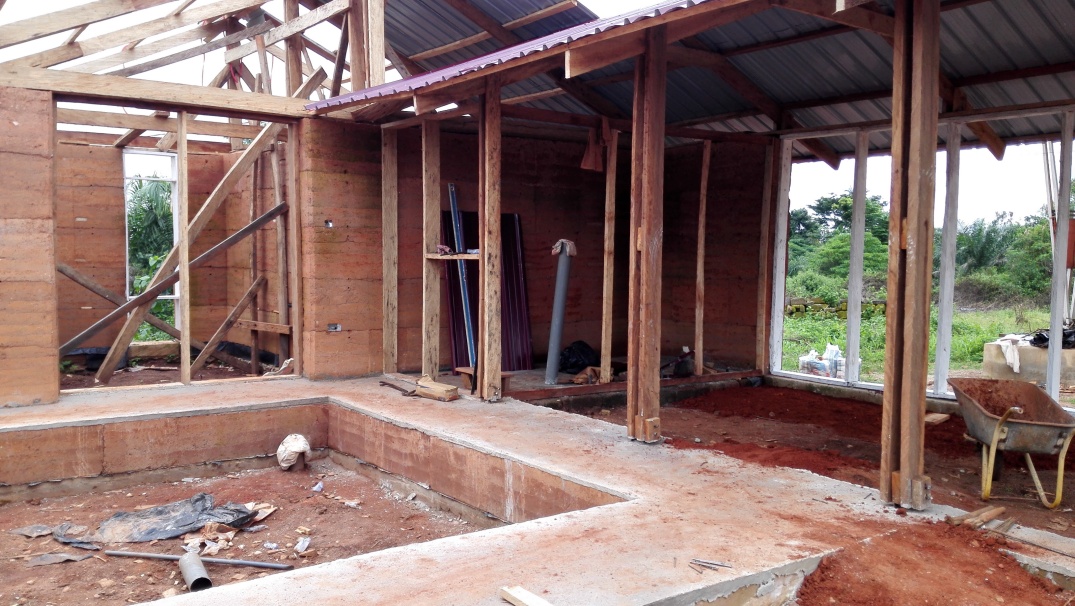 Another week in Abetenim, getting closer and closer to the end of our community project. Monday 17.10 we started to set the transparent sheets to cover all the upper parts of walls and gables. Before doing that we nailed aluminium flashing to avoid any infiltration rainwater.

The red pipe fixed in between 2×3 profile and roofing sheet to reduce rain noise has not been finished yet. In the meantime, the main working space is already covered quite quickly.

Unfortunately, Tuesday 18.10 was time to say goodbye to Luca. He has been working with us for three months, he deserves a huge thanks for his costant and endless effort and calm. Best of luck Luca. We are really going to miss you here.

Opoku’s house is still going on, working half day at the site and half at his place from now on. The second level is almost completed but Opoku’s has got no cement, so we are going to wait until he buys more bags, even if from the third level he will need less, reducing his content from 4% down to 2% within the mix.

As long as the carpenters request wooden boards and profiles, we realized that we will need more 2×3 soon to ensure the roof structure completion. Therefore, the chief’s brother came with the hand saw to cut some 2×6 profile by half. Suddenly the machine broke, only after ten pieces cutted, make us necessarily buy new customized profiles.

This is why during this days the work is running slowly, between less people helping and many small works to do at the same time, missing wood and the dry season which is ready to bring sunny and sweaty days. During spare time we asked Adyengo and Safu to change the door’s frames of the two bedrooms, with better quality and hardness then the one already placed.

On Wednesday 19.10 two artist from Nigeria Edwards and Ellis completed the mural at the Junior High school and we took a look around lunch time. Here is the final result, in our opinion great and powerful drawings, able to inspire creativity and immagination among the all children of Abetenim.

At the site we applied the second coat of white painting to all the windows frames, as well as filling the rooms with red soil, which lasted two days. Opoku and his brother also came to help us in this task.

Before the weekend we prepared few piles of red soil in front of the project to be use for the flooring mix. The cement concrete within the mix will be quite low, 2% for the rooms, 5% on working spaces, kitchen and washroom. Right after compacting the soil filling, it was added a thin layer of sand, stabilized by ramming, to make the level horizontal and hard. After that, the rammed earth floor will constist of 5″ thickness, to be rammed once or twice.

On Thursday we tryed the babadua solar screens on the external frames. Nailing straight to the sticks doesn’t work excellently, because it breaks very easily even with the smallest nails.

Thanks to Stefano’s ingenuity, we came out with another idea, using metal bending wire to hold the ending part of the sticks, weaving it around many pins nailed inbetween the sticks, but not through.

Another test was around the openings solution, with metal mesh and mosquito net, which is the most popular method in this country, against insect and mosquito entrata.

The metal mesh we are using has small square pattern whereas the net behind will be the black type. Outside, at the bottom, some babadua sticks will protect the lower part from the rainwater.

On Friday 21.10 there was enough time to set some 2×3 wooden boards and complete the structure, as well as more roofing sheets above the single bedroom.

At Opoku’s place, the second level is already finished. He asked the carpenter to collect three doors frame and three windows frame too, but they don’t match each other and they have different dimensions. Therefore, we helped him to cut those frames, likewise adding the anchor strings through the rammed layers to lock the wood within the earth wall.

On Saturday 22.10 we changed some wrapped bags around the formworks and sewed new ones. Fortunately, founding few frames here at the site of Nka, we tought it was worthwhile to ask Frank to donate two frames to Opoku, in order to allow him to save money and time, and he warmly agreed that.